Completely designed, built and fitted out by David Garrick in time for SBA Midlands Regatta in June 1973. David Garrick travelled the boat extensively during the first 5 years after construction and covered many hundreds of miles by both road and water. In 1976 Firecrest undertook a sponsored cruise down the river Thames in aid of the RNLI. The boat was slipped in at Lechlade and took 10 days to cover the 123 miles down to Teddington lock with stops for fundraising and overnighting. It was reported that just over £300 was raised as a result. At some point during 1978, we believe Firecrest hit something solid with her starboard paddle wheel whilst underway, resulting in a twisted crankshaft. Whilst details are sketchy, it seems that she was laid up pending repair but was sold after a couple of years of standing outdoors. Purchased by a Mr J Bacon from the south coast area (date unknown), she was placed into covered storage for an estimated 40 years. The boat was completely untouched during this time with the builders personal effects remaining in the cabin. The boat was advertised for sale by Preston Services of Kent in the December of 2019 and was in a dilapidated state, still requiring the repairs from over 40 years prior. The current owner purchased the boat in the January of 2020 and has taken a year to complete the restoration and repair works. 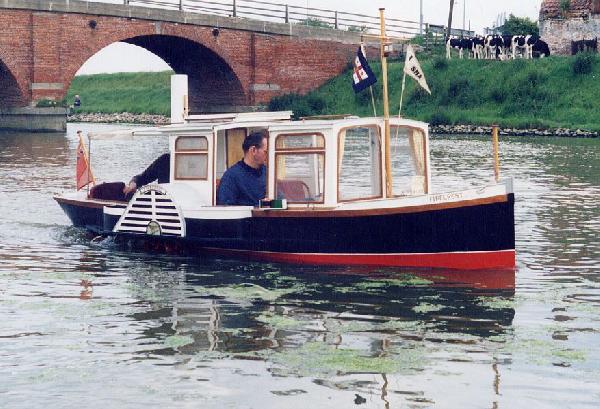 Taken mid 1970's having just passed under Tattershall Bridge on the river Witham.