New as fleet water carrier, launched 1946, completed 1947 and worked out of Malta until 1967. Upon returning to the UK she worked on the Clyde and Pembroke dock until she was put in reserve in Greenock 1976. Acquired late 1979 by Oswald Burgess when withdrawn from service and towed to Bristol. Ownership transferred to charitable trust, Steamship Freshspring Society 2014 Ref: Ships Monthly Nov 1987, and Funnel 51. Last steamed 1990. Following funding from the National Heritage Memorial Fund in 2016, she was taken to Sharpness drydock for remedial works and painting of the hull prior to being relocated in Bideford, North Devon. Since arriving in Bideford, the wheelhouse has been refurbished and the ship is regularly open to the public through the summer months as a static exhibit. 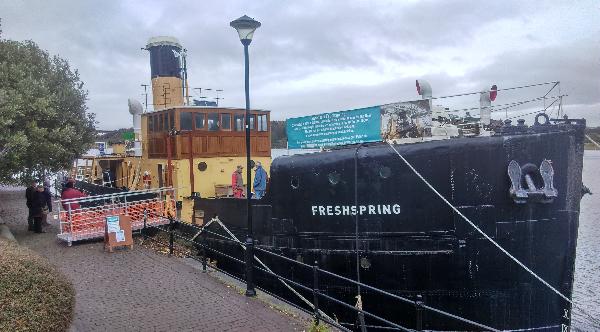