Passenger Paddle Steamer. Construction: Riveted steel.
Hull designed by A&J Inglis at Glasgow in 1946
Built 1947 by A. & J. Inglis Ltd. at Pointhouse, Glasgow
Fit out 1947 by A&J Inglis at Glasgow
LOA: 240' 0", Beam: 58' 0", Draft: 6' 0", Displacement: 1524600 lbs.
Hull Number 1330P. The 'P' signifies the Pointhouse yard as A&J Inglis was by that time part of Harland and Wolff in Belfast. Originally certificated to carry 1350 passengers. With almost 70 years of updates to worldwide passenger carrying regulations and safety policies in place, Waverley's carrying capacity has gradually been reduced and she can now carry up to 860 passengers. With fully fitted out passenger saloons, dining saloon, galley and bars, Waverley can cater for every need from a snack to a full meal service.

8 Feathering floats.
216" diameter, 132" wide.
Each paddle float is 36" deep. There are always two full floats worth in the water at any one time. Each float is 33 square feet in area.

Named after Sir Walter Scott’s first novel, Paddle Steamer Waverley was built on the Clyde in 1947 – to replace the original Waverley that sunk off Dunkirk during active war service in 1940. Waverley was originally intended to sail only between Craigendoran & Arrochar in West Scotland. She now sails right round Britain offering regular trips on the Clyde, the Thames, South Coast of England and the Bristol Channel with calls at Liverpool & Llandudno. Waverley is the world’s last sea-going paddle steamer. In 1975, at the end of her working life, she was famously bought for £1 by the Paddle Steamer Preservation Society. Waverley Steam Navigation Co. Ltd, a charity registered in Scotland, was set up to operate the ship. Waverley then began a second career as one of the country’s best-loved tourist attractions. Since she has been in operational preservation she has been awarded four stars by Visit Scotland, an engineering heritage award, and has carried over 5 million passengers from over 60 ports around the UK. 2003 saw the completion of a major restoration project, which returned Waverley to the original 1940s style in which she was built. This was made possible with major grants from the Heritage Lottery Fund and the PSPS. Contributions also came from Glasgow City Council, Scottish Enterprise Glasgow, the European Regional Development Fund and local authorities. In 1812, when Henry Bell’s paddle steamer Comet became the world’s first commercial steamship to operate in coastal waters, a tradition was started which remains alive today only in the form of the world’s last sea-going paddle steamer, Waverley. From the 1860’s onward, paddle steamers developed an important niche in the coastal passenger and excursion trade. Large fleets served the cities, towns, villages and resorts of the Firth of Clyde, the Bristol Channel, the South Coast of England, London and the Thames Estuary. Paddle Steamers also made a significant contribution to the war effort as minesweepers in both World Wars, and indeed Waverley is named after the previous Waverley who performed a heroic role at Dunkirk in May 1940 before being sunk by enemy action. With a few exceptions, the Clyde steamers were owned and operated by railway companies. These were largely commuter ferries linking all the villages with the nearest railhead for onward travel. Each year Waverley sails in the Western Isles, Clyde, Bristol Channel, South Coast and the Thames. For more information or to book a trip visit www.waverleyexcursions.co.uk or call 0141 221 8152 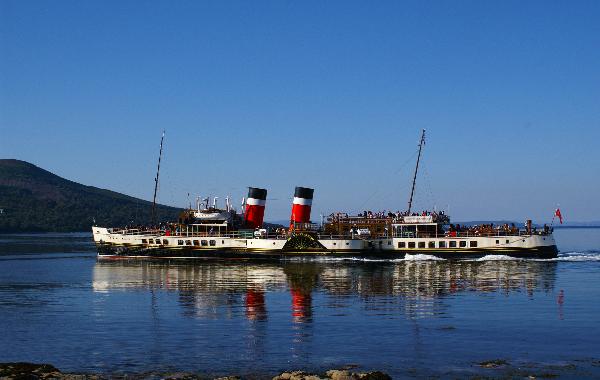