To be Advised, T.B.A." X T.B.A."
Shaft: ?" T.B.A.
Any advice on propeller design would be greatly appreciated.frankkitching@btinternet.com

Former Broads launch and work boat,Tug for Wherry Alma and Icebreaker! owned by J.Hobrough, Norwich.(Known by the owners as "The American Boat") Known to have been derelict in 1970, plant fitted by previous owner during 1970’s. Nov. 1982 to Jonathan Wade. Acquired March 2000, being refitted. Dendrocronologist has confirmed the Planking to be Cedar, and the Ribs, American White Oak (Not imported to the U.K. until 1910) The Boat came with an extensive photographic history compiled by previous owners. Current Owner circa 2006. frankkitching@btinternet.com 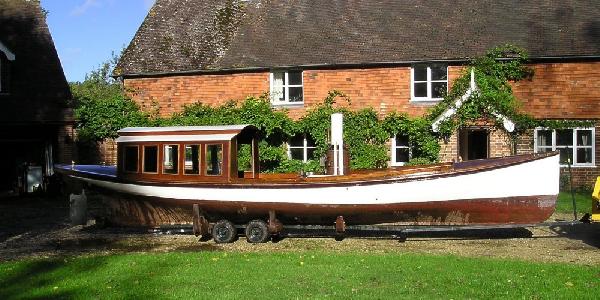