Twin. 6" + 6" X 6 1/2"
Built 1898 by G.F.G. DesVignes at Chiswick
sv valve. SLRG valve gear.
On 6 turned columns, non-condensing. Removed from Consuta in 1923 when the boat was converted to motor and subsequently used in Tom Taylor's boatyard for driving plate rolls, acquired by Graham Lindsay in 1960's and refitted in Consuta following restoration.

First launch built to Saunders new patented plywood construction technique (patent 222), using veneers stiched together with copper wire because there were no suitable waterproof glues at that time. The system became known as 'Consuta Plywood' named after the experimental launch that first used it and went on to be used with great success over the next 50 years on water, land and in the air. Consuta was built for H.S. Clutton, Cleeve Mill, Goring. Used as an Umpire’s launch until for many years up to the 1960's, including in 1949 providing television coverage of the Oxford-Cambridge boat race, the very first live outside broadcast. Various owners until 1974 acquired by Graham Lindsay, restoration proceeded slowly until 1999 when Trust formed to complete to steaming condition in 2000. Trust contact:- Brian Smith 01488 658795. 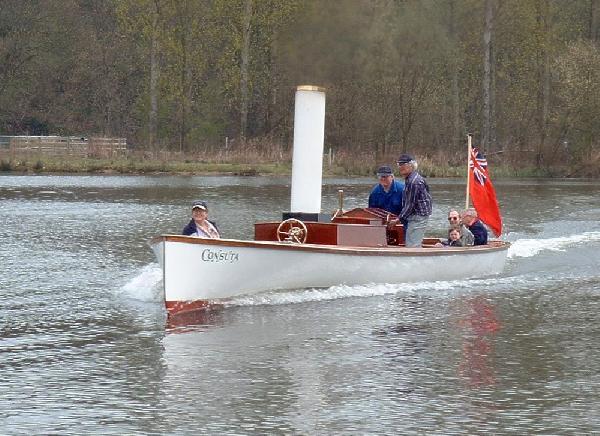